Be part of it all when you stay at the Mespil hotel. Located along the banks of Grand Canal, experience a 4-star stay with close proximity to Dublin's top tourist attractions, main shopping areas, event venues such as the AVIVA Stadium & RDS, and some of the city's finest bars & restaurants.

Whether it's discovering Dublin's top attractions, spending a sunny afternoon exploring Dublin's Coast, enjoying the fun with some family activities, feeling the energy at the latest events, or shopping to your heart's content. With something for everyone, Dublin is sure to impress!!

Like most modern capital cities Dublin has a vast amount to see and do, however, no other city showcases its history and modern life quite like Dublin. While wandering through it's streets, you'll spot medieval castles, gothic churches, modern offices, and everything else in between, all sitting happily side by side.

The Mespil Hotel is located in the heart of Georgian Dublin, and our neighbouhood has much to explore.

Baggot Street, located just around the corner from Mespil Hotel, is rich in history. Christened ‘Baggot Street’ in 1773, the street runs from ‘Merrion Row’ (near St. Stephen’s Green) to the end of Pembroke Row. It crosses the Grand Canal right at the junction by the hotel and provides a safe, short walk to the city center that is rich in history. Lower Baggot Street features architecture of Georgian style while Upper Baggot Street is predominately Victorian architecture, with some buildings dating back to the 20th century! The street is also lined with cafes, pubs & restaurants with ATM’s, banks and a Post Office also available.

The Ballsbridge neighbourhood is a quiet, leafy area of Dublin, conveniently located just minutes from the city center. The suburb is home to The Royal Dublin Society (RDS), AVIVA stadium and Donnybrook Stadium (now known as Energia Stadium) which showcase a variety of sporting, music and conference events throughout the year. The streets are populated with a mix od international companies, embassy’s & a number of trendy cafes, bars & restaurants. Rich in history, Ballsbridge was once home to famous authors Brendan Behan and Patrick Kavanagh with a statue dedicated to the memory of Kavanagh located directly across from the hotel. The famous ‘Raglan Road’ referenced in one of Kavanaghs most well-known poems is also found here, just a ten-minute walk from the hotel.
Herbert Park is also located in Ballsbridge and is the name of both a road & the public park. The 32 acre park features a duck pond, children’s playground, tennis courts and formal gardens. With the full perimeter stretching out at exactly one mile, it makes the perfect spot for a jog or walk.

Located only a short walk from the Mespil Hotel is Ireland's best known Victorian public park. St. Stephen's Green is a 9 hectare/22 acre park that has been maintained in the original Victorian layout with extensive perimeter tree and shrub planting, spectacular spring and summer Victorian bedding. The herbaceous border also provides colour from early spring to late autumn. Sanctuary from inclement weather can be obtained in the Victorian lakeside shelter or in the Victorian Swiss shelters in the center of the park.

Over 3.5 km of pathways are accessible for all users and the waterfall and Pulham rock work on the western side of the green are worth of a visit likewise the ornamental lake which provides a home for waterfowl and a garden for the visually impaired.
A number of sculptures are located throughout the park and the children's playground is a popular attraction of the park. 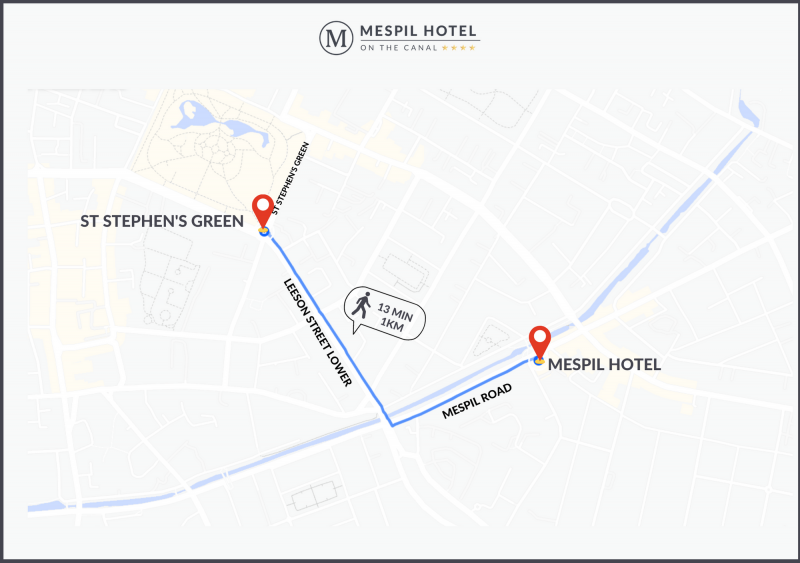 Founded in 1731, the Royal Dublin Society (RDS) is a philanthropic Society that hosts events and exhibitions as well as competitive rugby matches throughout the year.